Director of Sustainability for Green Gallaudet Rachel Benedict and student Michael Pachuilo work together to make an emission-free smoothie during a bake sale. The March 1 to 3 sale was one of the ways the student organization has connected with the community to urge greener practices and spread an eco-conscious message. Photo by José Garcia.

As part of an ongoing effort to make University operations more eco-friendly, the campus went carbon-neutral on April 22 in honor of Earth Day.

"The effect is as if we shut the boilers down for the day," said Stephen Kalmus, chief engineer in Utilities Services. Kalmus arranged to rely on natural gas for as much of the day's energy needs as possible, and he purchased carbon offsets for the remainder of the energy.

In recent years, the Facilities staff, led by Dr. Meloyde Batten-Mickens, executive director of the Facilities Department, worked in multiple ways to make Gallaudet more sustainable every day. Mickens credits her team, as well as the students, the Environmental Stewardship Committee, and the environmental intern positions in Administration and Finance, for making this happen. "It's like a handshake," said Mickens. "It's a community effort."

It was members of the growing three-year-old organization, Green Gallaudet, who first reached out a hand to bring about a day of energy savings in 2009. On March 28, Kendall Green went dark in honor of the organization WWF's Earth Hour. The effort called on both Facilities and individuals to turn off lights on that Saturday evening.

This is all part of a raft of initiatives that have increased Gallaudet's annual carbon savings from about 35,000 to more than 38,600 tons from 2008 to 2009, and continue to lighten the University's impact on the environment.

Gallaudet has had some initiatives in place for years. The recycling program has collected discarded paper and bottles for processing, while the shuttle service reduces Gallaudet's carbon footprint by making Metro and commuter trains a viable option for student and employee commutes.

Recently, Facilities has converted to using virtually all organic products for grounds maintenance. It further reduced chemical usage with the new incarnation of Hotchkiss Field. The field, used for football, soccer, and other activities, is made with recycled rubber and synthetic materials. Because there is no soil or grass to maintain, the field also greatly reduces water usage. The Sorenson Language and Communication Center, which opened in 2007, attained LEED certification, as will all subsequent new buildings on campus.

In 2007, Gallaudet transitioned to single-stream recycling, commingling trash and recyclables and then sending them to an off-campus facility to be separated. Paper towels used in the bathrooms are 100 percent recycled material, while hand soap and cleaning products are Green Seal certified. Even the ice melting crystals used to clear walkways after the winter's major snows were eco-friendly.

In 2008, the Facilities Department began yearly evaluations through the Go-Green Project, using the company Sightlines to monitor and benchmark Gallaudet's carbon footprint. The project looks at all aspects of the University's environmental practices, from electricity usage on campus to the distance that each employee travels to get to work. Sightlines provides both a snapshot of Kendall Green's impact and trending in its results. For utilities usage, Gallaudet also performed an Industrial Grade Energy Performance Review with Johnson Controls, Inc.

Mickens and Kalmus expect the savings to continue to climb. The very next report should show improvement, thanks to an increased amount of energy bought with Renewable Energy Certificates (from seven to 10 percent over the past year). In addition, Facilities, Green Gallaudet, and Bon Appetit Management Company, which oversees food service, plan to establish a composting system that keeps food scraps out of the waste bins.

Rachel Benedict, sustainability director for the student organization Green Gallaudet, says her organization has worked closely with Facilities to push Gallaudet toward a greener future. Other groups seek to go green, too, including the Student Body Government, which has pledged to use only biodegradable food service items for its campus events.

The flavor of sustainability 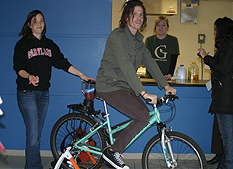 Green Gallaudet also found a willing partner in Davina Kwong, general manager for Bon Appetit. Disposing of leftovers is just one of the ways that Gallaudet's cafeterias are doing their part. Kwong emphasizes not only waste reduction, but also the other side of the production process. "Yes it's true that recycling and compostables are important, but it's even more important to think about where our food comes from," she explains.

Kwong and Chef Manager Jay Keller focus on buying regional and seasonal produce and sustainably-produced meat, dairy, and fish. In the Hanson Plaza cafeteria, students eat with reusable plates and flatware; in the Jordan Student Academic Center's grab-and-go Marketplace, Keller purchases low-carbon packaging. Hot and cold beverage cups and napkins contain a minimum of 10 percent and 35 percent post consumer fiber (PCF), respectively, while the cup sleeves are 100 percent PCF. All cutlery is presented individually as opposed to in sets, reducing waste, and instead of individual condiment packets, diners take a dollop of ketchup or a cup of mustard from dispensers. As the composting program moves into place, Keller is set to phase in as much compostible packaging as possible. "Some believe that being 'green' is the cool new thing," said Kwong. "For us, it's at the root of what we do on a day-to-day basis."

Benedict and her Green Gallaudet team are reaching out to show what individuals can do to improve sustainability. Green Gallaudet has combined outreach with fundraising efforts by selling low-impact snacks, including fruit smoothies blended by a bicycle. The group also created a video explaining ways to reduce waste in the cafeteria.

Next steps toward a greener future 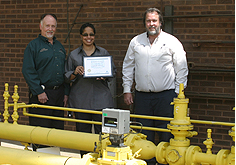 Director of Sustainability for Green Gallaudet Rachel Benedict and student Michael Pachuilo work together to make an emission-free smoothie during a bake sale. The March 1 to 3 sale was one of the ways the student organization has connected with the community to urge greener practices and spread an eco-conscious message. Photo by José Garcia.

Among Green Gallaudet's long-term goals are for the University to sign on to the American College and University Presidents' Climate Commitment. Kendall Green does not yet have the systems set up to satisfy all of the stipulations in the agreement, but Mickens says they have already made progress and hopes to see a presidential signature soon.

The Environmental Stewardship Committee, comprised of student, faculty, and staff representatives, will play a role in working toward that goal. Mickens appreciates the students' urging to make things happen. "I love it that the students were ahead of us," said Mickens. "That's one of the things that helped us come together and pushed us toward more sustainability priorities."