Campus Goes Dark to Call for Action on Climate Change 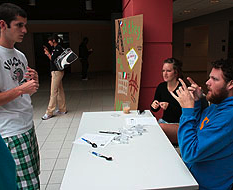 On March 28, the lights on campus went out. It wasn’t a blackout caused by an accidental power outage, but a fully intentional action to raise awareness about climate change.

From 8:30 to 9:30 p.m., the residents of Kendall Green joined environmentally conscious people from 4,000 towns and cities worldwide, as well as a number of sites that are famed for their grand illumination--the Eiffel Tower, Golden Gate Bridge, and Times Square--in observing Earth Hour, an activity organized by the World Wildlife Fund (WWF).
Photo: Cloe Canela
Green Gallaudet members Jonathan McMillan and Kate Johnson encourage students to sign a pledge to turn off their lights for one hour on March 28 in honor of the World Wildlife Fund's Earth Hour.
To ensure Gallaudet’s full involvement in the event, the student organization Green Gallaudet collaborated with Facilities to extinguish all non-essential lights in main campus buildings. Because light and electricity usage in the dorms was up to students, Green Gallaudet members asked dorm dwellers to sign a pledge to save energy during that time in exchange for a heart-felt thanks and a mini flashlight. Green Gallaudet encouraged students to use these flashlights and candles during Earth Hour, and distributed a list of ideas of activities to keep participants occupied during the hour, like having a candle-lit dinner and playing a game of charades. In just a short lunchtime tabling session, the pledge was signed by 87 students.

A main goal of Earth Hour was to send a signal to the world in general and U.N. players in particular that they must take major steps to confront climate change. The global effort has already had an impact. The day after Earth Hour, United Nations Climate Chief Yvo de Boer brought news of people’s concerns to a session on climate talks and urged delegates from nearly 190 countries to listen to the millions who turned off their lights. WWF reported de Boer saying, “The world’s concerned citizens have given the negotiations an additional clear mandate.” 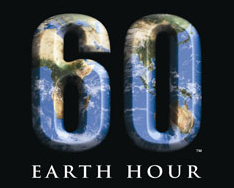 Reposted from: Inside Gallaudet
Posted by raychelle at 8:40 PM