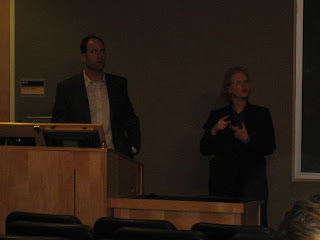 Green is everywhere, and there is a reason for that. While some may roll their eyes at this “fad”, it is undeniable that our environment is in need of attention, and Michael Brune was here on October 9th to talk about his book, Coming Clean: Breaking America’s Oil Addiction. Brune is the Executive Director of Rainforest Action Network (RAN) in San Francisco. Gallaudet was a familiar place to Brune, who visited his deaf brother during their college years, and he warmly greeted us before he began discussing how hazardous fossil fuels and dirty coal are to the environment, our health, and our pocketbooks. There were questions about whether clean coal actually existed, and while he acknowledged that coal itself is already dirty, there is such a method called carbon capture and storage to capture the CO2 from the flue gas that is produced during ‘cleaning’ the coal of impurities such as sulfur dioxide. The toxic chemicals are stored underground and are not meant to reach the atmosphere. However, once the carbon dioxide is stored, there is only a certain limit before the condensed carbon dioxide will begin emitting. Condensed carbon dioxide is lethal to humans; “90 million Americans live near oil refineries that release millions of pounds of cancer-causing chemicals, particulate matter, and other pollutants into the air each year” (Brune 2008).

Brune as the Executive Director of RAN has convinced corporations to go green such as Bank of America, Citi, and Home Depot. For instance, Home Depot has agreed to not get their lumber from endangered forests. Home Depot was not an easy victory for Brune. It came to the point where he went in Home Depot stores and made announcements over the intercoms saying things like, “Attention, Home Depot shoppers, we want to draw your attention to the doors in aisle 16 which were made from wood that has been ripped form the heart of the Amazon basin In aisle 12…” (Brune 2008) Citi was also a hard-fought victory for Brune. Citi quietly used its profits towards controversial projects without its customers’ knowledge. Brune educated Citi customers, advertised in New York Times, and managed to get dozens of other organizations to join in the campaign of pressuring Citi to stop funding controversial projects like logging in tropical rainforests. In 2004, Citi gave in and announced they had cut all illogical logging funding and instead supported indigenous communities. Bank of America had decided to adopt similar standards only four months later.

Basically, Brune talked about his successes and the tactics he had to use in his work. Brune also educated Gallaudetians on how little things we do in life makes a difference. Not only things we do, but where we get our resources from, which banks we use, which insurance companies we use, and so on because they are corporations with money and where their money go to mean a lot. The more educated we are, the more we realize how many other issues in our lives are impacted by dirty coal, such as the price of our health care (as the quality of our air improves, the cost decreases). Buy Brune’s Coming Clean: Breaking America’s Addiction to Oil and Coal, found in bookstores anywhere, including Bison Shop. Be educated. Live better.

Contributed by Rachel Benedict and Leila Hanaumi
Posted by Carrie Solomon at 2:28 AM